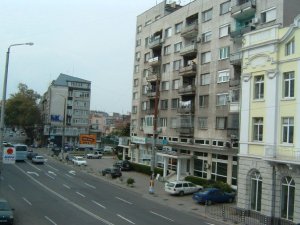 So I’ve gone to Bourgas.  In Bulgaria.  Not the capital or anything, that would make sense.  ish?  maybe not, Bulgaria is… interesting.  Even in Sofia which, it turns out, actually is the capital.  not that I’m there.  I’ve no idea what I’m doing here in Bourgas, except I’d decided to go to Europe for 7 weeks after finishing grad school (I was having a meltdown…) and didn’t really have a plan other than the plane ticket to london and then the… leaving of london?  So my good friend mentioned that she was going to a wedding in Bulgaria, and I thought, well WizzAir (the Hungarian budget airline, clearly that sounds _amazing_ly non-likely-to-kill-me…)  flies London to Bourgas for $30US, how badly could this end??

Well, it starts when I paid a cab driver, in American dollars, to take me away from the Bourgas airport, ideally into the city. The closest we came to communication during this trip was:

ME: “god i want to die, your country is fugly, everyone looks like they were actually murdered by Stalin 45 years ago and have just been hanging on ever since, wondering how they could manage to get more depressive, what the crap is your currency, why do your ATM’s not work, can you put me somewhere with free breakfast, please?”

It turns out there’s not much worse, in fact I would say _nothing_ worse than, hanging out in a bus station in a strange town, in a strange country, at a strangely early hour of the morning, on a sunday, in a strange corner of eastern europe.  Fine, so like, death, torture, totally worse.  But of all the things that may reasonably happen to a reasonable person, this reasonably sucked ass, even for me.  My phone doesn’t work.  Tough to find the Bulgarian wedding party without it.  I’ve been up for… 3 days straight? (side note- I hate London Luton Airport.  Damn this place.  someone.  please).  It’s at least 60 hours anyhow.  I have no money.  I’d assume they do have money and language in Bulgaria, but sadly, I do not know what form either of these things might take.

Long story short: new plan.  Figure I can’t function in my state of whatever anyway, and should just go to bed.  then will wake up and… find my friend?  alternativly, Plan B: the
“can’t find friend, fuck this town, don’t like it anyway, get on bus to Istanbul”  sounds pretty good 🙂 So I completely pussy out and cave, and find the closest hotel to my location (score!  room in a real hotel!  to myself!  for a whole night, no bunkbeds, no sharing, no nada, $20US.  and free breakfast!  realize the flaw in this ointment next morning when i taste the “breakfast”…).

everything is lovely in the morning, when one is NOT trapped at a bus station, unaware of what currency and / or which language might  extricate oneself from a pit of UGH.  it turns out Bulgaria is beautiful! and they use the Lev! (sooo thrilled to acquire some, whatever that is…)   Bulgarians speak Bulgarian (yes, yes, this makes perfect sense, but i’m American dammit, and i don’t do shit like pre-plan trips to places where the fuckin locals shoud just learn to speak fuckin English) and, while years later they remain the most depressed people I’ve ever encounted, they are perfectly helpful, pleasant, and nice. So nice, in fact, that I decide to join a tour group of travelling crazies around Bulgaria the following day. But not before I’m bitched out by a naked, vaguely inebriated, psycho (love you, Naomi!), thrown off-stage under a hail of lit cigarettes (love you, Weezie!), and crucified for a gypsy (damn you, small Bulgarian children, I’m not a gypsy!  not that there’s anything wrong with that…).  oh dear…

2 thoughts on “Nina’s Travel Rule #1: Everything Always Looks Worse From the Bus Station”