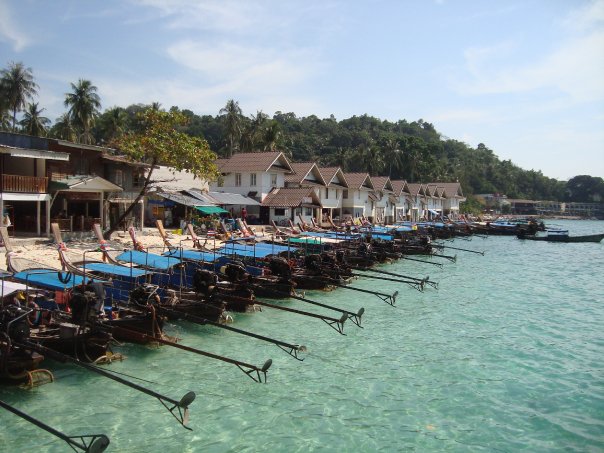 Travelling with no possessions is really nice. I did this for about a month a couple years ago, completely against my will. I don’t normally take much shit with me anyway (a friend once asked how I pack so light and my answer was “pack everything you want to take, then put it all back in your dresser and take the empty bag”). I once actually allowed someone to cut the handle off my toothbrush before leaving on a trip cause we’d decided it was just wasting space. You only need the bristles anywho, right? But this time was much worse… 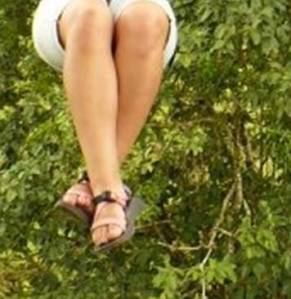 Loss 1) In Uruguay, my dear brother (I hate you, Jarrod!) left my pink Chaco’s in a hostel (possibly the best hostel in the whole world,

despite their insistence that they couldn’t find my shoes, which I’d offered to pay to ship back to the states, which is clearly a bald-faced lie, as I’m sure one of their lovely employees is wearing them around South America RIGHT NOW) owing to a seriously unfortunate incident involving a drunk Chilean birthday girl and a vomit-covered bathroom. Yes, every wall was covered. By neither my brother nor I… which is no reason to lose my fucking shoes! I LOVED those chacos!

Loss 2) My camera died when I decided to leave my bag on the beach and go night swimming on Koh Phi Phi island (stupid tide! I KNEW you were coming in, but why did you have to come so FAR??), and so was donated to a hostel in Saigon. Yay, fewer cords to carry, and I’ve helped an industrious local child re-sell broken shit to tourists!

Loss 3) My passport met the same fate, and now is so water-logged the TSA actually laughs when they see it. The back cover’s coming off, the visas have melded, it no longer really scans, and it’s sposed to last 7 more years? Haha.

Loss 4) My beautiful iPhone lasted the longest, but finally bit it when a nameless Brit (I hate you, Mike Porter!) casually tossed it into the ocean. For a full half hour. So, maybe that’s not exactly true, but I still blame him for not doing up that water-proof bag right! 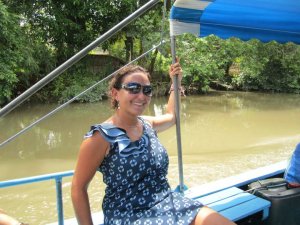 I was now travelling with like, 1 dress (ripped), 1 skirt, 2 tank-tops, 1 bikini, 1 pair flip flops (ripped), 1 sarong, and a bag to hold it all. Oh, and a water-logged passport. I think I may also have had a pen? I was seriously displeased for about a week (it turns out iPhone Withdrawal takes about a week to pass…) and then totally amazing. All those people facebookin on their laptops and bitchin about how the wifi sucks ass? I don’t care, I’m on a beach! Clothes? Lovely Thai ladies are perfectly happy to do your laundry every damn day for a dollar. Shoes? You really can snorkel and hike without them (don’t tell Mike’s brother this, what with that nasty parasite in the bottom of his foot…). I saw a chick in a hostel in Greece once, blow-drying her hair with a diffuser in the communal bathroom. Seriously? A diffuser?? Unless you’re actually working while you travel, there’s really no point to all this crap. For ex., I did know a girl in Thailand once, fabulous and fascinating Kitty, who was working her way around the world as a marijuana middle(wo)man. Like, she’d get to a new island, find the locals, purchase some shit, and then sell it to tourists too dumb / scared to find their own. So while I personally don’t care to patronize her business (nor wherever the hell she got her wardrobe), I do applaud her acumen, and totally admit she needed a laptop to sort out her dealings, as it were.

By now I had accepted the loss of these piddling physical possessions, but was soon to discover that some people don’t do well with travelling light. I and my non-existent luggage had made it to Cambodia with our good friend (who, I might add, in her defense, had brought a very small bag. And yes, this is the same one who attempted (and failed, through no fault of her own) to stop a Vietnamese woman from vomiting ON MY FACE. She’s really very lovely! The friend, not the puking woman). We’d boarded some sort of bus thing headed to Phnom Penh, and had made a pit stop at some sort of shack thing, where I decided to pee, mainly because:

a) The bus driver had turned off the bus, and I had started melting through my skin, that’s how hot it was, and

So after the obligatory “wait in line, squat, pee in hole, wash own pee down hole with plastic bucket full of hose water” shebang that occurs most everywhere in SE Asia, I thought it might be nicer to eat some of that delicious, unidentifiable stuff wrapped in a banana leaf that you can get at every roadside shack in the country, than to get back on a parked, non-running bus that might make my body melt out through my skin. Silly me. No sooner had I started bargaining with an urchin for some yummy banana-leaf-goop, than I see the screaming. And gesticulating. And general all-around pissy-pants-ing. And it was coming from the bus…

Friend: “omg WHAT are you doing?”

Me: “peeing? Bargaining with an urchin?”

Friend: “but omg, did it not occur to you that I might want to pee too?”

Me: “sure, yeah, wondered what you were still doing on that bus, what with your body melting out through your skin…”

Friend: “omg get back on here and watch my bag so I can pee!”

Me: “uhh… yeah. I think not. Those urchin’s wanna steal my stanky clothes, they’re welcome to em. I own nothing and don’t really like carrying that bag around anywho.”

I’m all for flashpacking. I really like my iPhone (yes, yes, clearly I replaced it the day I got home…), and sometimes I really want wifi, and sometimes it’s really nice to stay somewhere with AC or, god forbid, water that comes pre-heated. Sometimes though, it’s just not worth the hassle. And sometimes, you see more when you’re not encumbered with shit, ie- you get to eat yummy banana-leaf-goop and not melt your ass off on a bus with only your very nice camera for company.

The final straw: last 4 days of the trip. I’ve decided to go to the Full Moon party on Koh Phangan island. Why, you ask? Well, it seemed intelligent at the time, I swear. So I took: a tuk-tuk to an airplane to another airplane to a bus to a boat to a motorbike to another boat. And yes, I threw up on each and every one of these contraptions (except the motorbike.  pure fear.), owing to my previously overenthusiastic consumption of a dodgy whiskey bucket in Siem Reap (I love you, Ft. Lewis College kids!).

blah blah blah, party party, NO! I did NOT start a fist-fight with a drunk Scotsman over that U.S. loss in the world cup! I did NOT!, yadda yadda, and I come to at about 10am with… no shoes. None. They were only ripped flip-flops and all, but still, they were all I had… Where have they gone, you ask? Who can say. I’ve not been to bed, and I never got a hotel room, so they’re not there, anyway. Now, the way I saw it, I had two options at this point. I’ve got a flight back to the states in like, 2 days, and I’ve gotta get back to Bangkok to get on it. This will almost definitely involve: a walk to a bus to a boat to a train to a motorbike to a cab to a plane. So I can either:

a) Purchase a pair of $5 flip flops at any one of the obnoxiously abundant tourist shops that seem to be the sole industry of this island (aside from whiskey-bucket-sellers and mushroom-shake-makers, clearly), or

b) Embrace my new-found, hard-won status as The Girl Who Requires No Things, and just go home without shoes

I seriously considered option b and am still convinced it woulda worked. However (you’re welcome, mom!), I did in the end make the grown-up decision. I successfully straddled the fine middle line between flashpacking and hobo-land, and have ever since been happily sporting these fabulous, $5, neon yellow Havaianas, sold to me by the loveliest bucket-lady in Thailand 🙂 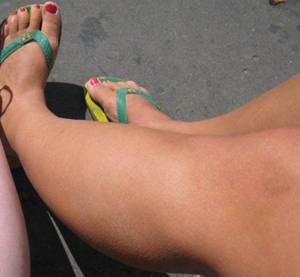 3 thoughts on “Nina’s Travel Rule # 4: Flashpacking is for People who Don’t Get drunk and Throw their Shit in the Andaman Sea”