Skip to content
Omg urgh. People like STILL won’t stop asking me how fab the rally was, and I STILL can’t bring myself to stop saying ‘fuckin’ goddam awful! I mean, it was an adventure :)’ So to further elaborate my point to death, and because The Lovely Alaskan just will NOT let me not write this any longer, oh and also to distract myself from scrawling ‘psychotic’ graffiti on every cheetos image I can find, I hereby give you:

Nina’s Omg the Top 10 Things you TOTALLY Must Do on the Mongol Rally to have the BEST TIME EVAAAAAH!

Part 3. And I swear Part the Last.

4) DO spend somewhere between “every other night” and “every night” sleeping in a swag, in a ditch, next to something sketch (e.g. a burnt out building, the aforementioned GERMAN cemetery, at one point a disco full of dead stuffed endangered animals, or possibly next to a cliff that falling off of would drop you into Afghanistan), preferably after having either skipped dinner for vodka or eaten something canned / cup-noodled / clearly unheated, out of your car boot.

My favorite instance of which being the night we spent in a fifth floor walk-up, somewhere in Tajikistan, which is a seriously odd country, though still nowhere near close to toppin’ my list of Damn I Don’t Understand This Nation, in an unfinished suite that resembled nothing so much as, and may actually have been, what results when an abandoned Russian oligarch’s hunting lodge breeds with a truly awkward attempt at a karaoke disco, in a ‘Stan.

Don’t believe me?  See this:

3) DO abandon your car and teammate and flee the country to get shat on by an infant.

So, we’re in Tajikistan.  In the Pamirs.  Like, waaaaaay in the Pamirs. Somewhere ’round about 4700 m or so straight up the Pamirs in fact (erm, like ~15,000 ft?). Although I’m basing that more off our topo map than the altimeter app I handily downloaded a couple days previously, specifically to enable future whinging about how damn high I was. That being ’cause apparently the trusty iPhone didn’t like this altitude any better than me and had started doing inappropriate things, plus clearly there ain’t no interwebs in the entire eastern 1/2 of this god-forsaken country.

Now I’d read about the town we were stuck in before heading out, but somehow missed this little gem: “Murgab feels like the cantina scene in Star Wars, a hard-living trading outpost [where] the people have had the perseverance to set up an outdoor “mall” of shipping containers,” so I was pretty enthralled with it our first full day.  Shit, I even ranted excitedly enough about the showers in the Murgab “Hotel” (quotes all mine) to talk some cheap-ass bike-packing Germans into staying there. Honestly I think I was just mainly excited that, though the Murgab “Hotel” has no heat and kinda resembles that hotel from The Shining, it was at least preferable to freezing my metaphorical balls off in a swag in a ditch. Oh and also, altitude sickness can suck my metaphorical balls.

So, somewhere during Day Three of my delirium-filled, altitude-sickness-induced unable-to-walk-more-than-four-feet-without-falling-over sojourn in The Town That God Shat On And Forgot, I started puking. After which I started googling altitude sickness related death. Oh wait! I totally fuckin’ did NOT do that, as the entire eastern half of this benighted country has no interwebs. Whatevs, my imagination / delirium was good enough, and so, I fled.

Oh yes, true story, I paid US$30 and hopped in a goddam motherfucking lovely 4-wheel drive, left that bitch Prudence, as well as the long-suffering Chris, in a dirt hole with a small toothless 164 year old man (the only one in town in possession of a welding machine), and fled across the border. Yes, to an entirely different country.

To all of which I say: who the fuck gives a flying shit, I MAY DIE HERE.

And that is how I found myself chatting to a remarkably lovely yet ominously cagey Swedish photojournalist, covered in Tajiks, their infants, and a fairly large volume of home-brewed fermented horse beverage (which, yes, they were feeding to the baby), on a high-speed death-race to the (as it turns out) beyond lovely town of Osh, Kyrgyzstan. Which would all’ve been just fab, until…

Me: … well, I have some life choices here. Specifically:

So yeah, I chucked that diaper out the window. I’m SORRY y’all, but that shit (hahahahahaha) was so not getting held.

On the plus side, Osh is seriously goddam lovely, warm, low-altitude, with a fantasmic $2 public swimming pool WITH BEER, and Pru showed up only like 3 days later 🙂

2) DO pull a runner if psychotic mechanics attempt to ass-rape you for some shitty welding they’ve done on your car.

If, after having pulled a 22-hour day attempting to flee a random dictatorship in a tin can of a Pru with the aide of 3 tow-trucks passing in the night, you ever find yourself in Khiva, Uzbekistan, might I humbly suggest you not trust the dude who hangs out in front the Hotel Alibek, mainly bc he is a punk-ass little shit who should probably just die. 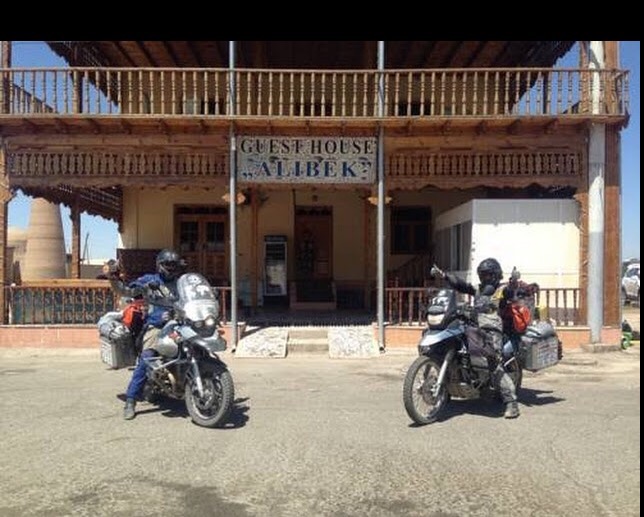 If you do choose to trust this man, mainly bc you are exhausted, disgusting, in need of his air-con’d SUV, and in possession of a broke-ass lil’ bitch named Pru, who herself is in fairly severe need of a number of welds to her chassis, amongst other ailments, do NOT:

On the plus side, they did get sick of chasing us after a while, and our hotel dude, at Guest House Lalipopa, which was the same price as cunt-face’s and about 20x nicer, found us an adorable little man to fix the fuel line that sketch-ass welders had fucked the day before 🙂

1) DO utterly and abysmally fail to actually make it to Mongolia. ON THE FUCKING MONGOL RALLY.  Yes that’s right, dearest and loyalest of readers, I still have never seen the beauteous plains, potholes, and yaks of Mongolistan. Turns out Team Yak Yak Goose was just ever so slightly over-ambitious on our itinerary planning, and we only made it to Kazakhstan. Which I can only describe as: weird as fuck, kinda awesome, slightly awful, and the direct polar opposite of Borat?

But hey, I flew home via Kuala Lumpur, spent 2 days in my hostel’s rooftop pool, didn’t have to drive back to London 6,000km direct through Mother Russia (haha! Sucks to be Chris!), am not dead, and, erm… it was An Adventure??

‘Cause why?  That’s right, ’cause Mongol Fucking Rally.

OH! Also, bonus round, as I’m always so goddam slow, so you’re welcome 🙂

0) DO cross this bridge.  ‘Cause no one ever fuckin’ believes me!