Dispatch from The Armpit of Australia: I find myself currently on the Gold Coast, stuck for four days at what I can only describe as Tampa meets Vegas at spring break. It’s Schoolies week, that lovely time of year when all the Aussie kids finish high school and descend on the beach to drink themselves violent and send the rest of the country slightly mad with nausea. Clearly I’m too old for this miserable shit, but what the fuck, I’m here, and now it’s on…

I just spent a lovely 5 days in Brisbane for work. Presented at a conference of engineers (omg), relaxed in the heated lap pool at my adorable B&B, and then… Met a friend for 4 days holiday (I love you, Trish!). She’s a fabulous person, truly, but doesn’t seem to understand that we have slightly different goals when on vacation. Ie- I don’t do amusement parks, stripper-clubs, and flirting with underage hooligans. But what the hell, you can’t really get anywhere nice from Brisy in 4 days, and it can’t be all horrific, right?

Umm, I just watched a balcony full of 40 yr olds send an emissary to invite the 18-ish hot chicks at the pool for… A gang rape? A drunken orgy? Who can say. I was woken this morning by the inane squealing of the newly inebriated (yes, it’s just getting louder), and was told the other day that last years’ Schoolies was quite a success, as only two revelers died?? To fully top off the horror, my dear dear amiga / reason for being here has left the country for 29 hours at a food fest in New Zealand. Which means I am alone. At Schoolies. And I’m officially too old to even be classed a Toolie (you know. The ass-wipes who show up to the party even though they graduated years ago. Matthew McConaughey-hey this is not. Seriously, pink jeans would improve this shit).

So, clearly the answer is liquor. We arrived Wednesday night about 11pm, after a truly god-awful trip that I can only describe thus:

Text sent to Adorable Husband upon arrival in Armpit of Oz: ‘Well we couldn’t buy train tix cause we had no cash, so we got cash, pit stop at the toilet, it wouldn’t take $50’s?? So we got a cab to the main station, Trish bought a child’s ticket (ironic), had to go to the window dude to change it, he gives me shit like ‘well if you’d come to the window in the first place…’ And I’m like ‘fuck you? If you took fucking plastic like your machine says you do, I wouldn’t have to be at your stupid window?’ And then we missed the train cause we were at the liquor store :(‘

And out we went. I’d been expecting the shit-show, but it turns out the GC is pretty dead on a Wednesday. Nada, nada, Christ this is boring… Ooo! The casino never closes! Let’s go get all ho’d-up and catch a cab over there! So, being the intelligent humans we are, we memorized the mobile number on the back of a pedi-cab and proceeded to the ho-ing (I looked fabulous). 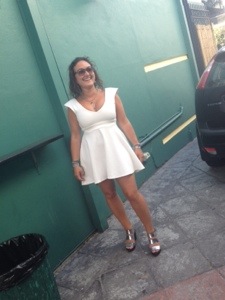 Head outside, I ring pedi-cab man, and this ensues:

Me: Ooooo, you really shouldn’t put your mobile number on your pedi-cabs, sir.

So we cabbed out, shockingly there was no one there, but at least everything’s $2 cheaper than in Mother Fucking Perth. After giving it a solid go, we collected the gin we’d stashed outside in the bushes and hitched a ride home with some dude who was really too up on the meth scene in the GC, and then I drank on our balcony til like 9am. Yes, I think I’m still hungover.

Yesterday I hung out with a German buddy (I love you, Jule!) who says she’s learned one thing living in the GC for 6 weeks: it is for fucking, fighting, and strippers. She may move back to perth.

So, in the past 3 days, this has happened:

Yes, the Amazing Ditching Bitch left me a montage before she bailed… Now, tonight’s my last night here (#winning), and I feel that I should at least go out to see the wreckage. The epicenter of the party’s about 2 blocks from my room (#losing), so I can totally escape un-raped, un-drugged and un-mentally-scarred, right?? I’ll be sure to keep y’all posted…